Home / Blog / 8 Best Prototyping Tools to Use with Sketch 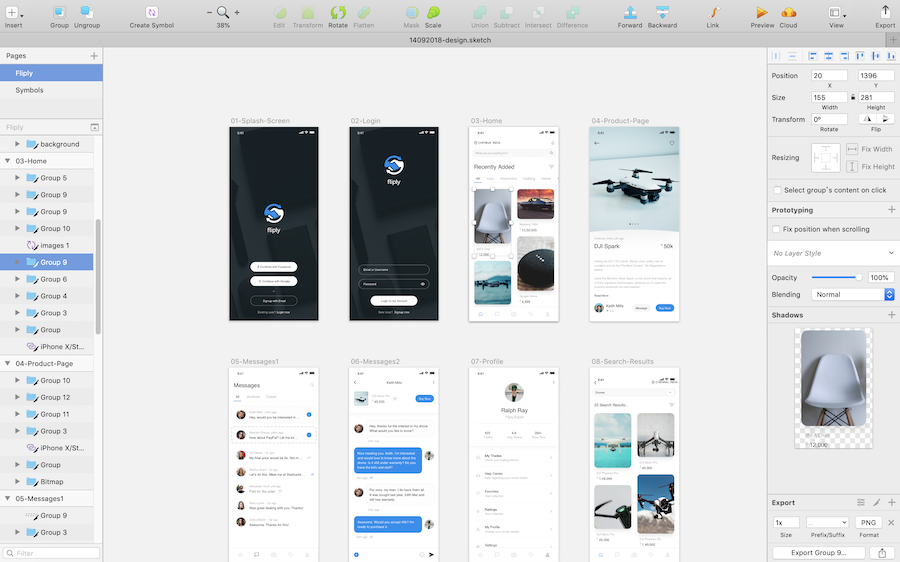 8 Best Prototyping Tools to Use with Sketch

Recently, we curated a collection of Sketch prototyping software currently available. We hope you will find one that helps you streamline your workflow and improve efficiency.

For a long time, Sketch has been criticized for its interactivity. The company seemed to prefer maintaining its status as a perfect drawing software, leaving the plugin development work to a third-party. This year, Sketch updated a version with light prototyping. This is undoubtedly good news for Sketch fans to create Sketch UI prototyping with this software.

How to Make Interactive Prototyping in Sketch

1) Sketch supports preview inside the software.

3) Live preview Sketch Cloud. (you can upload the project file to the official cloud after logging in to Sketch Cloud for multiplayer preview, and discussion)

When making high-fidelity prototypes, you need to upload content from Photoshop and Sketch. The process of filling these images into the software is time-consuming. So inVision developed Craft to handle this task.

Craft can not only output visual specifications, but it also has some cool features such as copying and arranging objects, defining spacing, text/image auto-filling, repeating element auto-filling, and more. After installing this plugin into Sketch, you will be able to work seamlessly between Sketch and InVision. By combining the design and prototyping processes, you can quickly export high-fidelity prototypes.

How to Make Interactive Prototyping in InVision Craft

From the introduction of the official website, you will understand that InVision’s prototyping method is through adding links. Add a link to the artboard in the interface element, set the transition animation and add a micro-interaction to convert the static image to an interactive prototype.

Internal preview of the software

Mockplus iDoc hands-off designs with accurate specs, assets, code snippets, and interactive prototypes automatically. As a brand-new collaboration tool for designers and developers, it goes far beyond design and workflow — which allows mobile designers to create a masterpiece. It allows you to upload your wireframes and visual designs from Photoshop, AdobeXD, and Sketch, and add them to your project folder in iDoc.

How to Make Interactive Prototyping in Mockplus iDoc

Click “Preview” on the top toolbar to demonstrate your created interactive prototypes.

Use Flint to create small interactions and animations to achieve a comprehensive flow of multi-screen apps. With its Transition Designer, you can create jumps and transitions very quickly. For beginners, it’s a straightforward, handy tool. It can be used to design simple but impressive prototypes.

How to Make Interactive Prototypes in Flinto

Flinto can quickly implement interactive design and seamlessly work with Sketch. Through the plugin, you can upload your material directly into Flinto, add links and transition effects, and add automatic jumps. By uploading images, adding hotspots, and corresponding interactive actions, you can quickly generate prototypes. Also, customers can conveniently view the prototype through web pages or mobile phones.

Principle and Flinto have many similarities. But as a prototyping tool, Principle specializes in conversion production and the interaction between Sketch screens. Some designers prefer this design method, while others prefer to use a Transition Designer like Flinto or Auto-Code in Framer.

How to Make Interactive Prototypes in Principle

Use Principle to easily stream your multi-screen app, or focus on micro-interactions. Compared to the other tools described in this article, Principle has a unique way to make a prototype design.

3) Polish animation with delays and curves.

1) Drawing is inconvenient, so it is recommended that you make a design in Sketch and import it into Principle.

2) Cannot animate in the current page.

3) The material in Principle cannot be freely resized. Only the scale option on the left panel can be used to adjust the width and height.

As we all know, Axure is a veteran design software. As a professional prototyping tool, it can create prototypes quickly and efficiently. To create a high-fidelity prototype, you need to import the vector material created by Sketch, such as icons, controls, buttons, etc. into Axure. This will improve the efficiency of interactive prototyping design.

How to Make Interactive Prototypes in Axure

1) Install the Sketch plugin AxureRP.sketchplugin, select the Sketch material and click on the menu’s Plugins-AxureRP-Copy Selection.

2) For general interaction, in Axure you can filter the settings one by one through the pop-up window, and go to the property panel to filter the target page.

3) A more complex interaction requires a conditional generator to implement. Axure can add conditional judgments in interactive settings, but users need to have some programming common sense, otherwise, it is quite difficult to master, especially when you use it for the first time.

Marvel is a free prototyping web application for web design and mobile UI design. It is based on your pre-designed PSD or Sketch document, which means that your visual draft can be used without conversion formatting. Of course, the wireframing (.jpg or .png) can also be imported for subsequent interaction design.

How to Make Interactive Prototypes in Marvel

1) Synchronized artboards to Marvel through the Sketch plugin.

2) Select the interface element and connect the target artboard through the hotspot (Hot Spot).

3) Set the transition mode and operation gesture of the page. It’s not as intuitive as linking, so this part may be confusing.

Unlike the other prototyping tools, Framer is probably the most special because it requires designers to have coding abilities. The prototype produced will closely resemble the final product.

It supports calling the system keyboard, inputting real text, and then using it as data; it also supports real control and monitoring of audio and video. Framer’s strength is its seamless support for HTML, CSS, and Javascript. Taking into consideration of audio and video, there are dozens of attributes and events that can be used.

How to Make Interactive Prototypes in Framer

Prototyping in Framer is intuitive; with just a few clicks, you can create a basic level of interaction. Just copy and paste the artboard from Sketch into Framer, and use the Link to add transitions such as push and overlay, or use a multi-directional gesture to create a nested scroll view.

These are 8 best Sketch prototyping tools recommended. Of course, there are many other tools that could be included, such as Pixate, UXPin, and Origami Studio from Facebook.

Design Career: How to Get a Design Job You Dream About

Hi, I’m Yassine Zidane, a UI/UX and graphic designer based in Tunisia, with mixed expertise in print, web, branding at digital agencies, and innovat